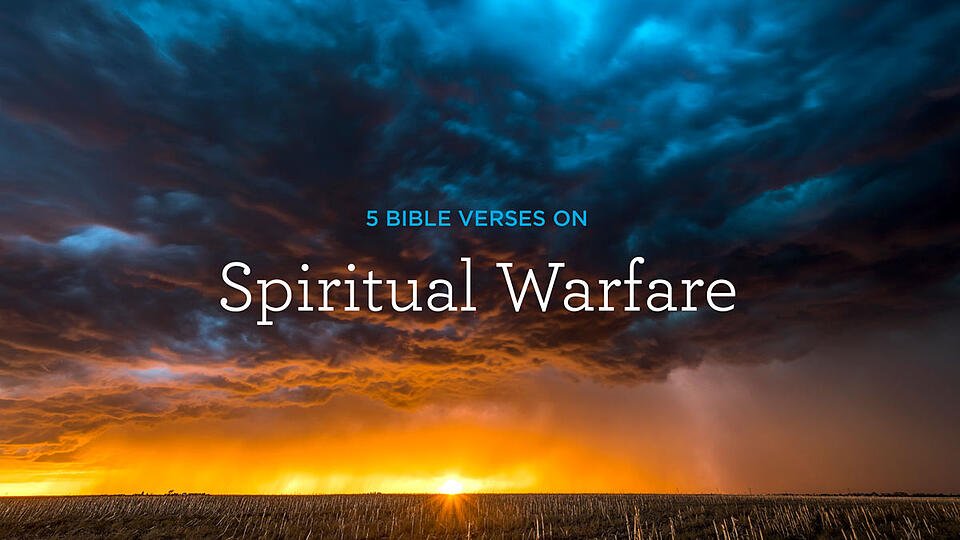 Ephesians 6:10–11 “Finally, be strong in the Lord and in the strength of his might. Put on the whole armor of God, that you may be able to stand against the schemes of the devil.”

Commentary from the sermon “Be Strong, Stand Firm” by Alistair Begg:

“Everyone who is transferred by grace from the kingdom of darkness into the kingdom of light, everyone who becomes a citizen of Christ’s kingdom, is caught up in a cosmic conflict of eternal significance. Now, we know what it is to be involved in arguments and discussions and conflicts that will eventually peter out. But the battleground that we’re considering here in Ephesians 6 is a battleground of eternal matters. And these eternal matters are being worked out in everyday life. …

“You see, the Gospel is what the Evil One challenges. And it is the Gospel, if you like, with which we’re to clothe ourselves. He’s not asking us, you see, to take on a new battle against the enemy. He’s saying to the readers of his letter, ‘You can stand safe and secure in the victory that has already been accomplished at the cross.’”

Commentary from the sermon “A Call to Battle” by Alistair Begg:

“The same devil who opposed Jesus in the wilderness is entirely opposed, is the enemy of all who are in Christ. … And this enemy is not an inanimate force. Don’t go wrong on this. This is not a description of a force. This is not Star Wars. … What Paul is talking about here is a personal being—a personal being who does not act alone. …

Commentary from the sermon “Lead Us Not into Temptation” by Alistair Begg:

“Every sin is an inside job. Every time that you and I sin, it is an inside job. There is no ‘The devil made me do it.’ The devil has the power to come and bring the world to us and say, ‘Would you like a little of that?’ but he does not have the power to make us sin. ‘Greater is he that is in [us], than he that is in the world’ (John 4:4, KJV). You need to understand that. We’re not paralyzed by fear. We’re not waging war to see if we’ll win or if we’ll lose. … It’s the difference between D-Day and V-Day. The war is over. Victory is assured. There are skirmishes still going on on the fringes, but it cannot affect the ultimate conclusion of the battle. The devil is a defeated foe. And yet still he wages war, seeking to bring down, to paralyze, to debilitate as many of the foot soldiers of Jesus as he can on any given day of the week. …

“When you get up tomorrow morning, know this: that wherever else you’re going, you’re going into battle. And you need to have on your lips, as I do, this phrase: ‘Lord, lead me not into temptation.’ In other words, ‘Protect me, Lord. I know how powerful sin is, and I know how weak I am. I’m asking you, Lord, in this phrase, to help me escape from the trap. I’d rather avoid temptation than have to defeat temptation.’”

Mark 3:26–27 “If Satan has risen up against himself and is divided, he cannot stand, but is coming to an end. But no one can enter a strong man’s house and plunder his goods, unless he first binds the strong man. Then indeed he may plunder his house.”

Commentary from the sermon “Kingdoms in Conflict” by Alistair Begg:

“Here we have the kingdoms in conflict. What has happened is that Jesus has stepped out into the battlefield, as it were. And in His ministry is represented the decisive turning point in the great conflict between good and evil, the conflict for the control of the world and the control of its people. And it is this story—the City of Man being built in contrast to the City of God, as Augustine put it in the fourth century—it is this which lies at the heart of this dialogue, and it is this which lies at the heart of the universe. …

1 Peter 5:8–9 “Be sober-minded; be watchful. Your adversary the devil prowls around like a roaring lion, seeking someone to devour. Resist him, firm in your faith, knowing that the same kinds of suffering are being experienced by your brotherhood throughout the world.”

Commentary from the sermon “Your Enemy the Devil” by Alistair Begg:

“It’s interesting, is it not, that Peter identifies the fact that Christians do have an enemy. … The reason that Satan is our enemy is because of a radical transformation having taken place in our lives. We were not by nature enemies of the devil, although he has always been about our discouragement and destruction. But we were never so radically removed from him until such times as God redeemed us by His grace. …

“Believe me, loved ones, you are dealing with a roaring lion. And he roars, as do lions. We ought not to think of the lion here in the Cleveland Zoo, chained behind bars. We ought to think of it out in the vast expanses …. They roar to intimidate their prey, and they roar so that they may be sure that no other rivals will come into their territory. …

“Not only does he roar, but he devours. That’s his strategy. He doesn’t just want to shout; he wants to eat. What does he eat? He eats people: ‘The devil prowls around like a roaring lion looking for someone to devour.’ He comes to undermine our confidence. He comes to silence our confession. He comes to disintegrate our faith. And his quest is absolute decimation.”