A Little Theology of Dinosaurs

By Scott Hubbard — 3 months ago 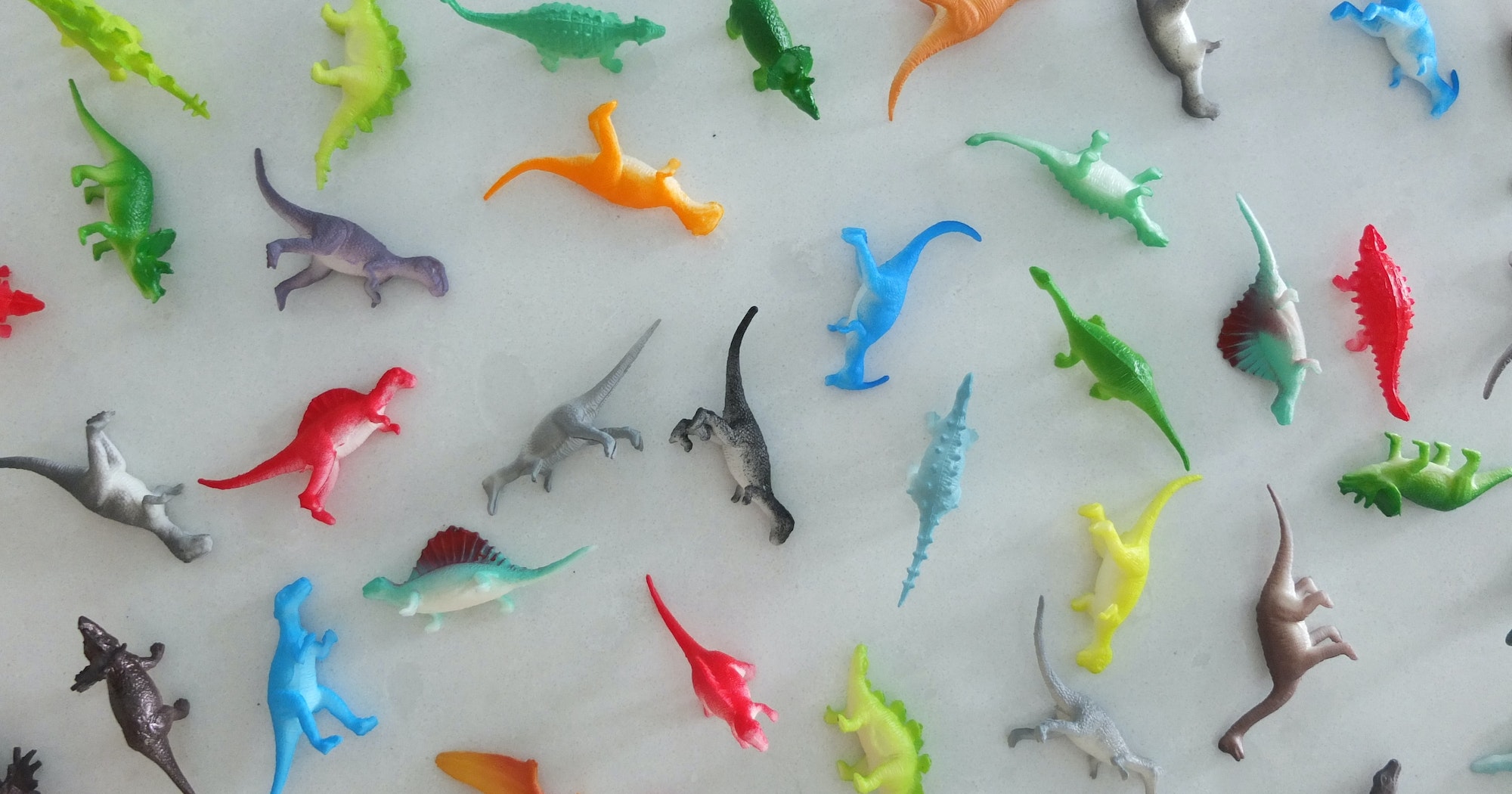 I’ve been spending a lot of time with Tyrannosaurus Rex these days — and Stegosaurus, Triceratops, and Velociraptor. I’ve also made the acquaintance of some less-familiar figures, like the long-necked, small-brained Diplodocus and the head-crested Parasaurolophus (which actually rolls off the tongue once you get the hang of it).

I’m no paleontologist or museum curator. I haven’t seen the latest installment of the Jurassic saga. I’m just dad to a 2-year-old boy. And like so many young boys, he reads, plays, and roars dinosaur.

Over the last months, his dino shirts and books (and figures and stickers) have dug up old fascinations, mostly buried since The Land Before Time and a book of Brontosauruses I thumbed through as a kid. They’ve also unearthed some new questions, especially as I try to help my son trace God’s design in the dinosaurs.

If the heavens declare God’s glory (Psalm 19:1), and his wondrous works proclaim his praise (Psalm 104:24), then surely these long-extinct giant reptiles say something spectacular about him. But what?

What we tell our children about dinosaurs will be shaped, of course, by whether we think they roamed the earth millions of years ago or relatively recently. Both perspectives have biblical merit; both also have their difficulties. I have my own leanings on the question, as most of us do, but for the purposes of this article, I’m going to sidestep that matter entirely.

I won’t mind much whether my son embraces a young-earth or old-earth view of creation; I will mind greatly whether he sees dinosaurs (and all the earth) in relation to the God who made them. And the most important lessons dinosaurs teach, it seems to me, have little to do with the age of their bones. Whether they lived in the Mesozoic Era or the days of Noah, much remains the same: Many were fierce. Many were fantastical. And many were absolutely enormous.

What then can we learn from such incredible creatures? Among other lessons, consider three.

Trust the God of Wisdom

Steve Brusatte’s popular 2018 book The Rise and Fall of the Dinosaurs tells an absorbing history of the dinosaurs’ reign. Unfortunately, it also represents and reinforces the popular view that dinosaurs have nothing to do with God. Naturalistic evolution plays the deity in Brusatte’s telling — a blind and brainless force somehow endowed with tremendous foresight: “evolution created” beasts like the behemoth sauropods (108); “evolution assembled all of the pieces [and] put them together in the right order” (117); T. Rex and his ilk were “incredible feats of evolution” (225).

The naturalistic worldview may be relatively new; the underlying impulse on display here, however, is anything but. God’s people have always needed to confess God’s handiwork over against popular myths. In the ancient world, Israel’s Canaanite neighbors considered the tannînîm (fearsome sea creatures, sometimes translated as “serpents,” “dragons,” or “monsters”) to represent “the powers of chaos confronting Baal in the beginning” (Derek Kidner, Genesis, 54). Moses, meanwhile, writes in Genesis 1:21 that “God created the great sea creatures [tannînîm].” The Canaanites can say what they want. We know that even the monsters are God’s masterpieces.

In similar fashion, God’s final speech in Job takes a massive land animal, Behemoth, and a fierce water beast, Leviathan (another monster of Canaanite lore), and describes them as God’s creatures: “Behold, Behemoth, which I made” (Job 40:15); “Whatever is under the whole heaven is mine” (Job 41:11). Nor need we wonder if God would say the same of dinosaurs. Many scholars identify Behemoth and Leviathan with the hippopotamus and crocodile, but the poetic descriptions take on monstrous proportions. Behemoth and Leviathan could easily be mistaken for a sauropod or tyrannosaur.

“Divine wisdom adorns every creature, down to their very bones.”

Children growing up in a naturalistic age need to hear, often and joyously, the psalmist’s creation creed: “O Lord, how manifold are your works! In wisdom have you made them all; the earth is full of your creatures” (Psalm 104:24). Divine wisdom adorns every creature, down to their very bones. In the first place, then, dinosaurs invite us to name and trust their true Maker.

Fear the God of Power

Imagine the largest of elephants, seven tons of flesh and bone spread from trunk to tail. Now imagine, if you can, a creature seven times this elephant’s weight and three or four times its length, lumbering across the land with a towering neck, barrel belly, and tree-trunk tail. You now have some faint sense of Argentinosaurus, probably the largest land animal ever discovered.

Now consider another creature, far smaller than Argentinosaurus, but also far more ferocious. At the same tonnage as our elephant (yet ten feet longer), he romps around on thighs thick with muscle, his massive head holding a jaw that snaps with six tons of pressure — literally car-crushing in its force. You now have some dim idea of T. Rex, probably the fiercest land animal ever discovered.

Now picture yourself standing before such beasts. We would be right to say of them, as God says of Leviathan, “None is so fierce that he dares to stir him up.” And we would be right to draw the corresponding conclusion: “Who then is he who can stand before me?” (Job 41:10).

Dinosaurs ought to make us tremble — but not mainly before dinosaurs. Like a hurricane, they preach the power of the living God, the very God in whom we live and move and have our being, and before whom one day we will stand. As Matthew Henry says of Behemoth, so we might say of every dinosaur:

Consider whether thou art able to contend with him who made that beast and gave him all the power he has, and whether it is not thy wisdom rather to submit to him and make thy peace with him. (An Exposition of the Old and New Testament, 223)

God made every tooth in T. Rex’s mouth; he added every ton to Argentinosaurus’s frame. Though dead, their bones still speak, and teach us not only to trust their Maker’s wisdom, but also to fear his power.

Praise the God of Wonders

In Christ, however, the most fearsome displays of God’s power become occasions for praise. Faith transfigures the terrifying into awe-inspiring: thunder becomes the voice of God (Psalm 29:3), the vast cosmos his finger-work (Psalm 8:3), the raging sea a pavement for our Lord (Matthew 14:25), the fiercest beast a glint of his glory.

The children of God know how to look at Leviathan (and, by extension, dinosaurs) and see not only his beastliness, but his “goodly frame” (Job 41:12). They can sit inside his footprint and worship the God of wonders (Psalm 104:31–32). They can trace his scales and, like King David beneath lightning, cry, “Glory!” (Psalm 29:9).

Psalm 104 gives a good sense of what dinosaur-inspired praise might sound like. Here, the psalmist marvels not only at the gentle beauty of God’s creation — flowing streams and singing birds — but also at its harder edges: the young lions roaring for prey and, strikingly, even Leviathan himself sporting in sea (Psalm 104:21, 26). Some may hold the bones of long-lost species and see only “a meaningless swarm of life,” Derek Kidner writes. But the psalmist teaches us to see them “as giving some inkling of the Creator’s wealth, and the range and precision of his thought” (Psalms 73–150, 405).

“Rightly held, the fossils of these ancient beasts are tuning forks for songs of praise.”

Paleontology allows us to sing Psalm 104 with a cast of characters perhaps unimagined by the psalmist, but long enjoyed by God and long awaiting our discovery. Rightly held, the fossils of these ancient beasts are tuning forks for songs of praise.

In the century before the first dinosaur discoveries (around 1820), pastor and nature lover James Hervey (1714–1758) responded to the new, Newtonian science of his day by saying, “We should always view the visible System, with an Evangelical Telescope . . . and with an Evangelical Microscope” (The Spirit of Early Evangelicalism, 150). Study the stars if you’d like: chart their courses; measure their distances. Study too the cells: mark their features; describe their functions. Yet study both as the handiwork of God.

In an age of dinosaur discoveries, we might add to Hervey’s evangelical telescope and microscope an evangelical chisel. Study the dinosaurs: learn their names; consider their age; read a few dozen children’s books about them. Yet don’t neglect the even larger lessons they teach.

My son’s dinosaur-mania may fade. But in the meantime, we’ll be tracing the wisdom of God in his Ankylosaurus figure, and the power of God on his T. Rex T-shirt, and the praise of God in his 2-year-old roar.