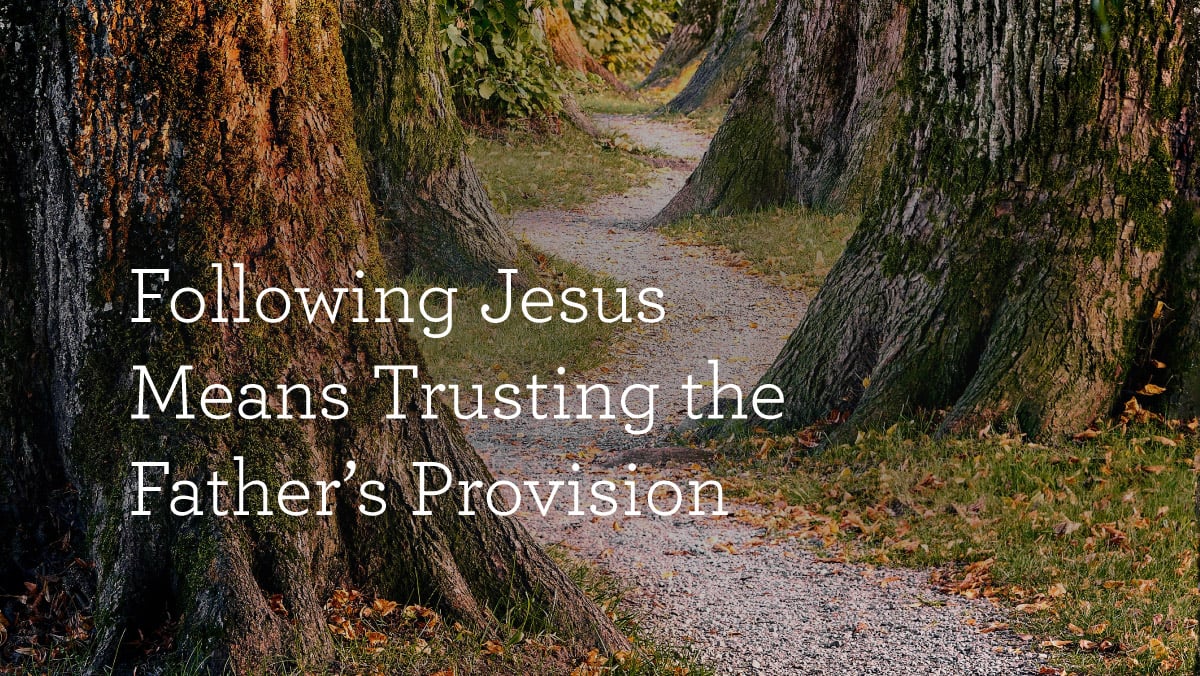 Jesus Christ’s teaching about possessions is radical. It confronts both the selfish society in which we live and the sleeping church, which has so often gone with the flow of the world’s anxieties and greed. If the church is to be a shaft of light in the world’s darkness, then those who follow Christ will need to demonstrate a godly outlook toward worldly goods by embracing an absolute trust in the Father’s provision.

What does it mean to follow Jesus? As one prayerfully continues in obedient faith and identifies with Christ in His suffering and self-giving love, it will also mean setting aside materialism for something that truly satisfies.

On one occasion, a man asked Jesus to adjudicate a family dispute about an inheritance. Because it was not a part of His mission, Jesus flatly denied the man’s request (Luke 12:13–14). But then He followed His response with a parable warning against greed and a sermon exhorting His disciples to put God first. We can learn from both as we seek to follow Him too.

He said to them, “Take care, and be on your guard against all covetousness, for one’s life does not consist in the abundance of his possessions.” And he told them a parable, saying, “The land of a rich man produced plentifully, and he thought to himself, ‘What shall I do, for I have nowhere to store my crops?’ And he said, ‘I will do this: I will tear down my barns and build larger ones, and there I will store all my grain and my goods. And I will say to my soul, “Soul, you have ample goods laid up for many years; relax, eat, drink, be merry.”’ But God said to him, ‘Fool! This night your soul is required of you, and the things you have prepared, whose will they be?’ So is the one who lays up treasure for himself and is not rich toward God.” (Luke 12:15–21)

In Luke 12:15, Jesus lays down a foundational principle regarding worldly goods: “One’s life does not consist in the abundance of his possessions.” Neither wealth nor the things it can buy define a person. The problem, of course, is that we often live as though they do. And of course, greed and covetousness are not exclusive to those who have much. Even those who aren’t well off can worship and pursue material wealth in their own way, as can the moderately comfortable.

No matter our station, then, we ought to ask ourselves the question that this parable confronts us with: “Do I live as if my life consists in the abundance of my possessions?” For the rich man in the parable, the answer is clearly yes—and three perils accompany his outlook.

Neither wealth nor the things it can buy define a person.

First, the rich man does not know himself. He fails to realize that he is more than a stomach that needs to be filled, an appetite that needs to be satisfied. He fails to realize that his purpose in life is to be rich toward God by glorifying and enjoying Him. Many people who have “made it” in our society are actually quite miserable because all that they have acquired and achieved does not touch the deepest longings of their lives. The rich man’s full barns can feed his body for a few seasons, but they have no power to nourish his soul.

Second, the rich man never sees beyond himself. His speech is peppered with the personal pronouns “I” and “my.” He’s like the lady of whom it was said, “Edith lived in a little world bounded on the north, south, east and west by Edith.” And because he cannot look beyond himself, his attitude is a refusal of the way of Christ. Instead of finding joy in denying himself, he aggressively affirms himself. Instead of finding joy in giving, he seeks it in keeping. He is like “the kings of the Gentiles” mentioned elsewhere by Jesus, who “lord it over them” (Luke 22:25, NIV). The Lord Jesus would have us be like Him instead, as people who serve (vv. 26–27).

Many people who have “made it” in our society are actually quite miserable because all that they have acquired and achieved does not touch the deepest longings of their lives.

Third, the rich man never sees beyond this world. This man’s great tragedy is that while he is prepared for worldly ups and downs, he isn’t prepared for God’s judgment. As all of us are prone to do, he assumes that life goes on forever. But it doesn’t. One day, we will stand before Almighty God and give to Him an account of our lives and of the response we have made to His Son. On that day, whoever now lives as if their life consists in the abundance of possessions will be in for a grim shock.

And he said to his disciples, “Therefore I tell you, do not be anxious about your life, what you will eat, nor about your body, what you will put on. For life is more than food, and the body more than clothing. Consider the ravens: they neither sow nor reap, they have neither storehouse nor barn, and yet God feeds them. Of how much more value are you than the birds! And which of you by being anxious can add a single hour to his span of life? If then you are not able to do as small a thing as that, why are you anxious about the rest? Consider the lilies, how they grow: they neither toil nor spin, yet I tell you, even Solomon in all his glory was not arrayed like one of these. But if God so clothes the grass, which is alive in the field today, and tomorrow is thrown into the oven, how much more will he clothe you, O you of little faith! And do not seek what you are to eat and what you are to drink, nor be worried. For all the nations of the world seek after these things, and your Father knows that you need them. Instead, seek his kingdom, and these things will be added to you.” (Luke 12:22–31)

In His parable, Jesus warned His disciples against greed and covetousness. As He continues to teach them, He flips the issue around and tells them not to worry. Ultimately, the root of greed and worry is the same: they both emerge from a failure to trust God. The connection is clear: whether we desire it, fear not having it, or both, life does not depend on stuff. And so Jesus, with a gentleness that recognizes that we all experience worry of this kind in our lives, invites us to lay our anxieties down at the feet of our provident God.

Most of our worries have to do with allowing our minds to be ordered by thinking that is untrue. Mark Twain allegedly said, “I am an old man and have known a great many troubles, but most of them never happened.” You die a thousand deaths in fearing one. And so Jesus issues a call to His disciples to think. They are to consider the character of the sovereign God who provides for the needs of His creatures, and they are to consider that same God’s special love for them and attention to them as people made in His image.

As He draws His sermon to a close, Jesus offers this concluding principle: “Seek his kingdom, and these things”—that is, food, clothing, and the like—“will be given to you as well.” We might paraphrase it by saying, “You take care of My things, and I’ll take care of your things.” When we think that a rich life consists in the abundance of possessions, we’ll find ourselves in a state of spiritual poverty, however much we have. But when we recognize that we were made to glorify and enjoy God and when we seek to do so, we’ll find our souls satisfied and our deepest need met.

Most of our worries have to do with allowing our minds to be ordered by thinking that is untrue.

In other words, Jesus wants us, as His followers, to give up on fear and move into the realm of faith and faithful living. God is capable for all of our circumstances. We should not be so proud, then, as to assume that we’ve actually found something that God is unable to cope with.

Ultimately, though, it is in the cross of the Lord Jesus Christ that all our fears are put to rest. God has set eternity in our hearts (Eccl. 3:11). We all know that we’re going to live forever somewhere and that we have an appointment with the living God. So instead of responding to worry with silly platitudes, pious statements, or fear and trembling, we can lay it all down at the foot of the cross. There we find the promise of forgiveness before God’s throne. There we find the promise of life forever that the rich man could not achieve with his grain-filled barns. In Christ, even those whose lives are cut short in this world do not fail to receive a provision far greater than greed could ever provide, for He is pleased to give us the very kingdom of God.

“Fear not, little flock, for it is your Father’s good pleasure to give you the kingdom. Sell your possessions, and give to the needy. Provide yourselves with moneybags that do not grow old, with a treasure in the heavens that does not fail, where no thief approaches and no moth destroys. For where your treasure is, there will your heart be also.” (Luke 12:32–34)

Throughout these passages, Jesus’ words are the kind words of a shepherd. He looks at this “little flock,” and He essentially says, “Don’t be afraid. I know what you need, and the Father’s plans for you are glorious! So instead of hoarding and coveting and being like the man in the parable I just told you, give! Be prepared to be outlandish in your generosity! Sell stuff, even; give to the poor; and look forward instead to the reward you will receive on account of My righteousness.”

When we recognize that we were made to glorify and enjoy God and when we seek to do so, we’ll find our souls satisfied and our deepest need met.

If we’re going to seek the kingdom of God, it will mean ceding control over every aspect of our life to God. He is not interested in becoming second-in-command in our little armies. He is King and Lord, and He seeks the throne of our heart. When He sits on that throne, wealth and possessions cannot sit there too. God’s kingdom is a greater treasure than any we can lay hold of in this world. When we value it as we ought, we’ll find a satisfaction for our souls that outlasts all worldly gain.

This article was adapted from the sermons “‘If Anyone Would Come after Me, He Must…’ Seek His Kingdom” and “Why Worry? God’s in Charge!” by Alistair Begg.