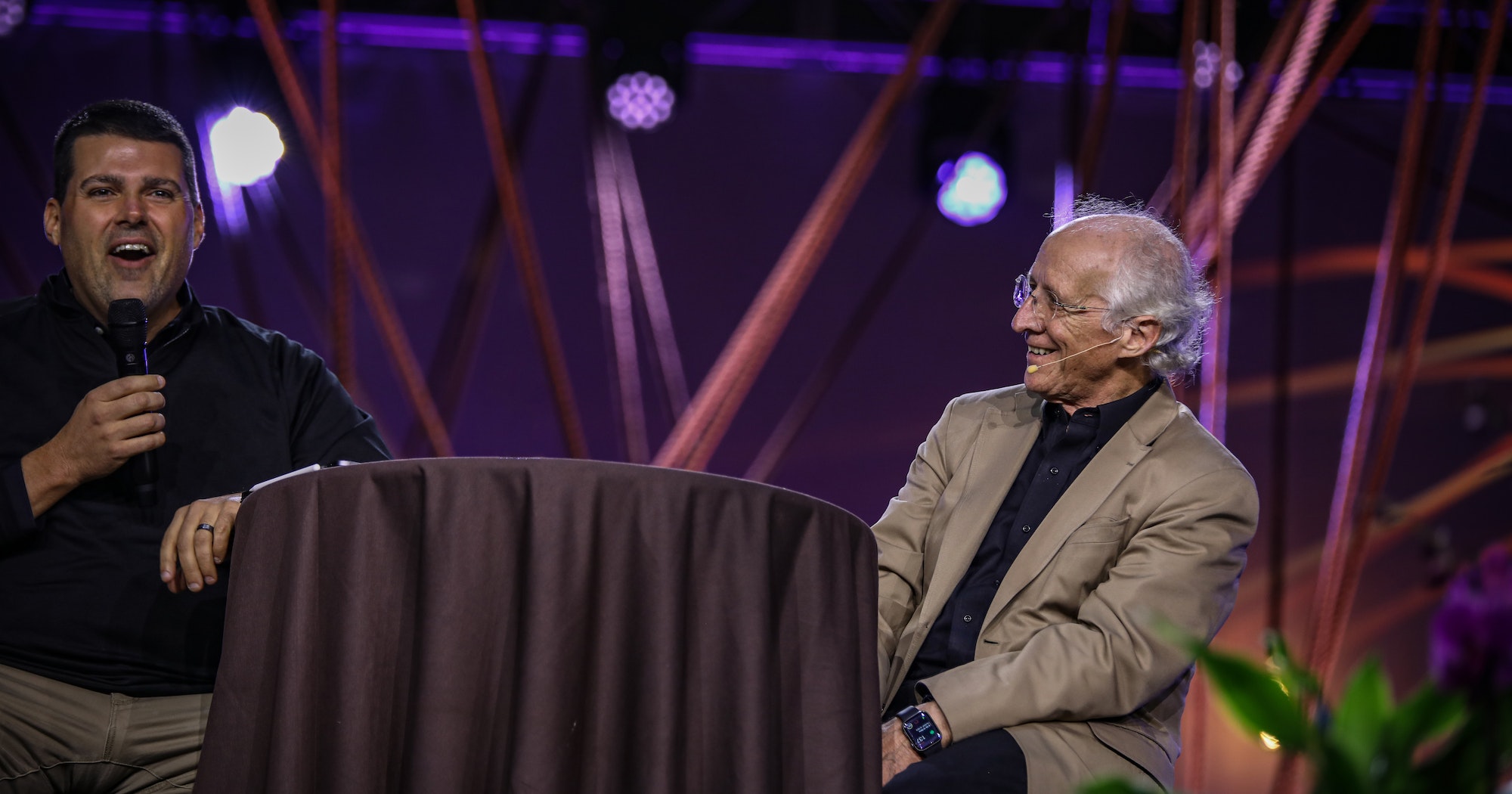 Happy New Year, everyone! 2023 is here. We launch the new year with a more informal episode than normal. This one was recorded live in Nashville in front of two thousand friends of ours who were quite engaged, as you can hear.

The direction of our podcast is shaped by you, the listeners, right? You send us the questions; we sift through those; I ask John Piper the questions. I ask John Piper your most awkward questions. I’m willing to do that for you because I serve you, our listeners. And I’ve been wanting to do something like this for a long time on the podcast, and I figured, Let’s do this in Nashville. Let’s hear from John Piper about his favorite things.

Over our decade of podcasting, we’ve received over a hundred questions from listeners asking random questions about John Piper’s favorite soft drink, movies, novels, poets — things like that. So I just compiled all of those questions. I’m going to pose them to Pastor John, and he’s got to rapid-fire respond, okay? So you can’t elaborate very long. I’ve boiled down these questions to twelve. Twelve questions. Okay, here we go. Ready, John Piper?

Yeah, but listen, some of these are going to be really short — like one-word answers. Which means I can go longer on others, okay?

I consulted my wife about this. I knew this question was coming, and we agreed that at the top would be Henry V, Kenneth Branagh’s Shakespearean movie. There’s an amazing speech that a pastor cannot listen to and not be moved to tears: “We few, we happy few, we band of brothers; / For he to-day that sheds his blood with me / Shall be my brother.” And then England defeats France at 5-1 odds. And they sing, “Not to us, O Lord, not to us, but to your name give glory” (Psalm 115:1). It’s just a riveting, dramatic Shakespearean piece. That’s number one.

Number two would be Chariots of Fire, which you have seen. And the scene of him opening the note that says “God glorifies [or God honors] those who honor him” — that’s a powerful statement that moved me deeply.

And my wife said, “You really have to say Princess Bride.” But you don’t know why I have to say Princess Bride. And the reason is because when I first saw it, I was preaching through Hebrews, and there is one scene that’s serious in this hilarious movie. It’s the scene where — now I had to go back and remind myself the names because I forget names — Inigo Montoya, he’s standing at the top of the cliff, and Westley’s climbing the cliff, and he’s going to fall down if he doesn’t hold on. And Inigo says, “I could drop you a rope.” And he says, “Yeah, and then you would let go of the rope.”

And a seriousness comes over his face, and he says, “I swear on the soul of my father, Domingo Montoya, you will reach the top alive.” And Westley gets serious and says, “Drop the rope.” I used that in the next Sunday sermon because of the power of a promise and an oath in Hebrews.

All right. That’s really good. That was a little more elaborate.

I won’t do that. I won’t do it anymore — might be tempted to.

A Man at Arms by Steven Pressfield is also contemporary — written in the last five years, probably. It’s a dramatic telling of a young speechless girl carrying the Corinthian correspondence to Corinth, Paul’s letters to Corinth. And a man at arms steps up to be her protector. Amazing book.

And then historically, if I had to pick a classic, it would be Crime and Punishment by Dostoevsky, just because the power of the description of the tormented soul of Raskolnikov is unparalleled.

All three. Right now, I’m on a leave working on Look at the Book. I’m on Logos nine hours a day. I ran it into the ground. We had to call them to get them to figure out how to make it work after nine hours of work. And they fixed it for me. I use my iPad for my devotions, and it’s Logos that I use. I’m very indebted to Logos.

Your favorite poet not in Scripture?

George Herbert — died in 1633, wrote a collection called The Temple with 164 poems. None of them has the same rhyme scheme or meter. It’s an absolutely amazing collection. The content, the craft — those two things together — I think in Herbert are without peer.

Your favorite poem not in Scripture?

Well, I thought a lot about that. “My Song Is Love Unknown” is a hymn, but if you take away the beautiful music and the beautiful tune, Samuel Crossman’s poem by itself is magnificent — simply beautiful. The rhyme structure and the meter are very unusual, and it’s very hard to put solid, deep, moving words without sounding corny into structures of rhyme and meter. So, “My Song Is Love Unknown” would be it.

Love that Crossman line, “Love to the loveless shown that they might lovely be.” Such a great line.

Your favorite — oh, this is important; this is what the people want to know — your favorite pop, soda, soft drink.

Your favorite dinner at home?

My wife’s spaghetti. She’s sitting over there.

Yeah, so there’s just no — hands down, she would know the answer to that right away. And so, I’m just on her case to make it as often as possible when we have company and elsewhere.

When our sons were growing up, we didn’t very often go out to eat, and when we did, we went to the places I like, like Chick-fil-A. And then, if we stepped it up, we would go to Olive Garden. And they thought Olive Garden was fine dining. It is. Why would you want to go any higher than that? Food tastes weird if you go higher than that. The more expensive the restaurant, the weirder the food. I don’t know why expensive gourmet chefs make food taste strange — it’s just strange.

A man of refined palate.

I don’t want my food to taste strange.

I love to play Scrabble with my wife. I love to work in the yard. I like to pull grass out of sidewalk crevices. I hate grass growing in sidewalks. And I like straight borders. I like it when the sidewalks are smooth. I don’t like weeds growing around the boxwoods. I get a deep satisfaction from making things look Edenic or eschatological, whichever way you want to look at it.

So the first layer is Grape Nuts, and the second layer is Mini Shredded Wheats — not the sweetened kind. And the last layer is Great Heartland Granola, and then blueberries on top. I’ve eaten that for years and years. When we go on vacation, Noël puts it all in a big sack, and we take my breakfast so I don’t have to eat the stuff they serve here. I can eat that.

Your favorite song by a Christian.

That’s impossible. But just right off the front burner, since I’m 76, and death is just coming on very quickly, the fresh rendition of Matt Merker’s “He Will Hold Me Fast” has risen in my affections and in my personal singing and my church singing to a level of sweetness that few songs have in recent years.

Over the decades, I’ve had favorite hymns. But if you pushed my button right now and asked, “What would you like to sing? What’s your emotional quotient right now?” It would be, “He holds me. He’s holding me. I’ll get through. He’s holding me.” And the music that he put to that old hymn is perfect.

Your favorite song by a non-Christian?

There it is, John Piper’s twelve favorite things.