By Tom Ascol — 3 months ago 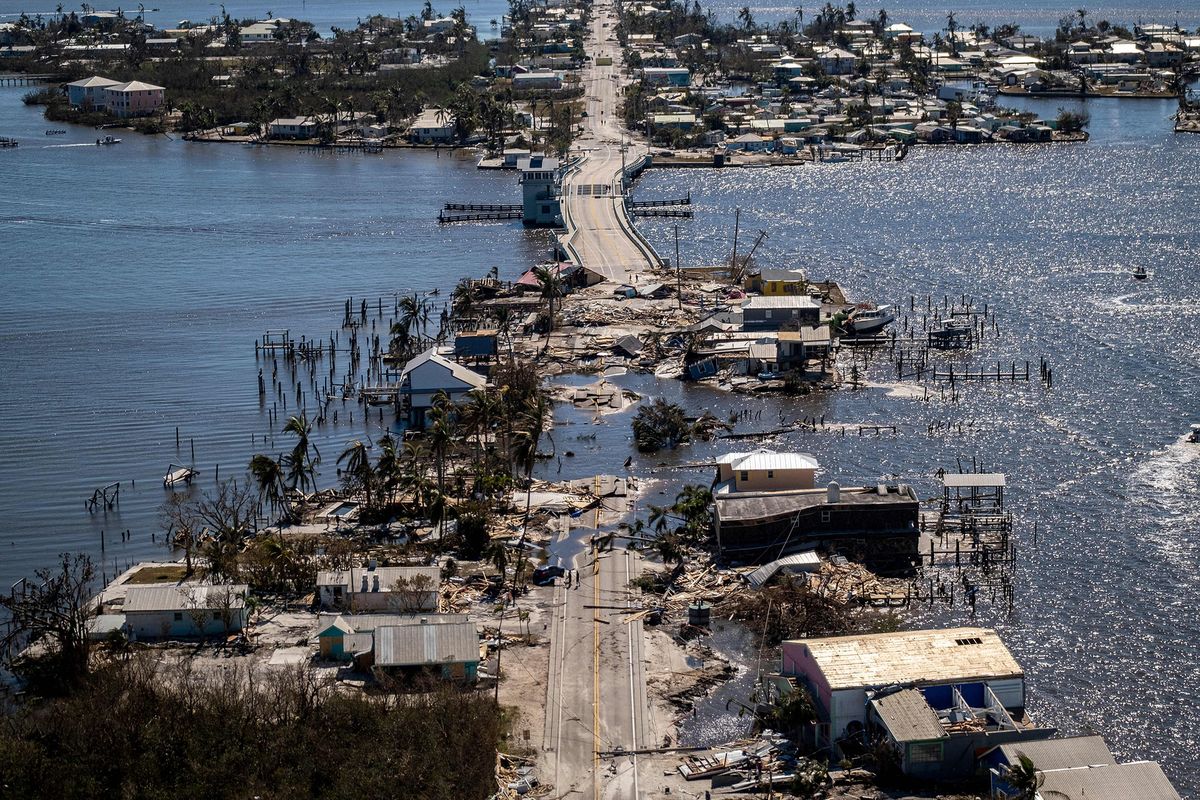 On September 28, 2022, Hurricane Ian slammed the coast of Southwest Florida with a fury not seen in nearly a century. In the immediate aftermath, our county sheriff’s office reported hundreds of fatalities from the storm. Fortunately, those numbers were not confirmed, although currently, the death toll has risen to 60 in my county and 100 in other areas. Property damage has been conservatively estimated to be in the tens of billions of dollars.

Due to a late jag to the southeast, the storm came right over my city of Cape Coral and the barrier islands to the west of us, Pine Island and Sanibel. Both the church I serve (Grace Baptist), and Founders Ministries were significantly affected. Some Grace members suffered significant loss. Nearly all suffered some loss. Businesses have been destroyed, homes devastated, families displaced, schools closed, and hospitals rendered inoperable.

I have lived through several serious storms during my 36 years in Cape Coral, including the last direct hit, Hurricane Charley, in 2004. Ian’s impact exceeds them all by far. In God’s providence, Donna and I were out of town when the hurricane landed. By his providence, the kindness of Delta Airlines, and the help of a good friend, we were able to get back to Cape Coral September 30. What I experienced in watching the storm from afar and seeing the aftermath up close has taught me several lessons.

It is impossible not to see God’s grace in the storm. I write that fully aware of the deep grief that many are experiencing because of what they have suffered. Yet, grace is on display everywhere. From tens of thousands of linemen from across the country who staged just outside the storm’s path and deployed as soon as possible to get electrical services back online to trauma surgeons on standby to assist in medical emergencies, help has been extended to the people of SW Florida from all over.

There are dozens of examples of specific ways that I have seen God’s grace displayed in and after the storm. A few of them will suffice to make the point.

Within hours of the storm’s impact, I started receiving texts, phone calls, and emails from family, friends, and strangers with offers to help with relief and recovery work. Churches and individuals gathered food, water, and other supplies and sent them to us. Financial gifts were sent not only from people we know but from those we have never met. This outpouring of generosity enabled our church to distribute supplies to people in our community who were devastated by Ian. In addition to this, through the tireless work of Southern Baptist Disaster Relief and the Red Cross, we were able to provide hot meals to people for several days. Some of the recipients wept with gratitude.

Under the leadership of the deacons and elders, the members of Grace have poured themselves out in serving one another and our larger community. I long ago lost count of the number of houses that have had roofs tarped, drywall cut, mud raked out, and other repairs done by willing volunteers.

Speaking of volunteers, I must mention the teams of workers that have come to help us with such work. Men and women, including young people, have traveled hundreds of miles with a willingness to do whatever they can to help. Through a previous connection with our church, Sheepdog Impact Assistance staged in our facilities and was still at work serving our community nearly a month after the storm.

In addition to these more visible and obvious displays, God’s grace has been steadily at work in more covert, “behind-the-scenes” ways. Homes have been opened to those who have been displaced from their own homes. Meals have been shared and practical hospitality has been multiplied. Counsel, personal encouragement, and prayer have been readily and effectively offered by those who themselves are dealing with difficult challenges left in Ian’s wake.

While the displays of God’s grace in acts of kindness and generosity can be traced to His saving work in Jesus Christ as well as to the fact that even unbelievers bear the image of God, Hurricane Ian has also provided opportunities to learn more personally the truth of the Bible’s teaching about sin. The world, obviously, is not the way that it is supposed to be—not the way it was originally designed to be and one day will be. Hurricanes, tornados, and floods are all part of what the Apostle Paul calls the “groaning” of creation as it awaits release from being made “subject to futility” (Romans 8:18-23). There will be no hurricanes in the new heavens and new earth.

Nor will there be looters or liars. Immediately after Ian’s winds subsided, some people began to ransack what was left of local businesses. Fortunately, both Governor DeSantis and our local sheriff publicly declared such wickedness unacceptable and warned looters that engaging in such activity could, and in some cases, likely would—result in death. From indications that I received, that message spread quickly among opportunistic thieves and most businesses did not suffer much loss from looting.

People who lost their homes on the barrier islands (which were hit the hardest) did not fare so well. Due to bridges being washed out to Pine Island (near our church) and Sanibel, the only access in the immediate aftermath was by boat or helicopter. The latter almost exclusively was limited to government officials or local news crews. Stories abounded of thieves in boats surreptitiously invading the islands, rifling through the remains of families’ possessions, and spiriting off with their stolen booty. It is a tragic display of Romans 3:10-18.

We saw similar, albeit less flagrant, expressions of human depravity in the conduct of some who received direct help from our church. Because of the generosity of so many from around the nation, our church quickly became a distribution point for much-needed basic supplies in our community. Most of those who came for help were deeply appreciative. Some had to be persuaded to take more than they originally planned to take (fresh water doesn’t last as long as you might think in Southwest Florida heat).

But others expressed frustration as if they had been mistreated when they weren’t given more or when supplies ran out. The creativity of depravity was also on display as various schemes were employed to get double, triple, and quadruple supplies. This occasionally resulted in tensions (“The greedy stir up conflict,” Proverbs 28:25) that had to be resolved by the wisdom that comes from above.

The last few years I have given more attention to the role of government in God’s world. There are a few reasons for this, not the least of which include the response to the Covid pandemic, the Black Lives Matter riots, and my study of Romans 13:1-7 as part of my regular exposition of that letter in our Sunday morning worship times at Grace.

Every thinking American Christian recognizes displays of failed government leaders and policies that are currently all around us in this nation. From President Biden’s promise to make abortion-on-demand the law of the land if Democrats control the legislature to the Supreme Court decision that undermines the institution of marriage and defies that God who instituted it, wickedness and corruption are evident in the halls of government. Examples could be easily multiplied.

So it has been refreshing to see government work in positive ways—ways that God intends and the Bible prescribes. Florida Governor Ron DeSantis has done an exemplary job in marshaling resources for and giving help and encouragement to the parts of the state that were ravaged by the hurricane. Under his leadership, over 40,000 electrical linemen were staged just outside of the storm’s path and deployed as soon as possible to begin rebuilding electrical infrastructures and restoring power for over 2.5 million people. He also cut through governmental red tape when federal officials said that it would be “months” before bridges to the barrier islands could be rebuilt. He helped unite efforts to get two bridges built in 14 days. I told one of his staff that the governor is a poster-boy for what the Bible means in Romans 13:4 when it says that the civil magistrate “is God’s servant for your good.”

I attended a town hall sponsored by my congressman, Byron Donalds, and was greatly encouraged by the practical help both he and Cape Coral Mayor, John Gunter, were providing in their official capacities to serve our city. Everything from expedited trash collection to Federal Emergency Management Agency resources was quickly made available to residents of Lee County and Cape Coral.

As I have reflected on these lessons, I am reminded that a stable government, kind and generous neighbors, and churches uniting to serve devastated communities are blessings that God has showered on our nation, state, and community. I have been to other nations in the wake of natural disasters. The contrast between those places and people who have benefitted from the blessings that flow from biblical truth and those places and people where that truth has never been known or has been forgotten is stark. Today, in America, even with the manifest wickedness in many of our cultural, economic, educational, and political institutions, we still have much for which to be thankful. There are still blessings of common grace that flow through and to those who hate the very God who is their source.

Hurricane Ian did not make that so. But it has certainly made it evident.