By David Mathis — 1 month ago 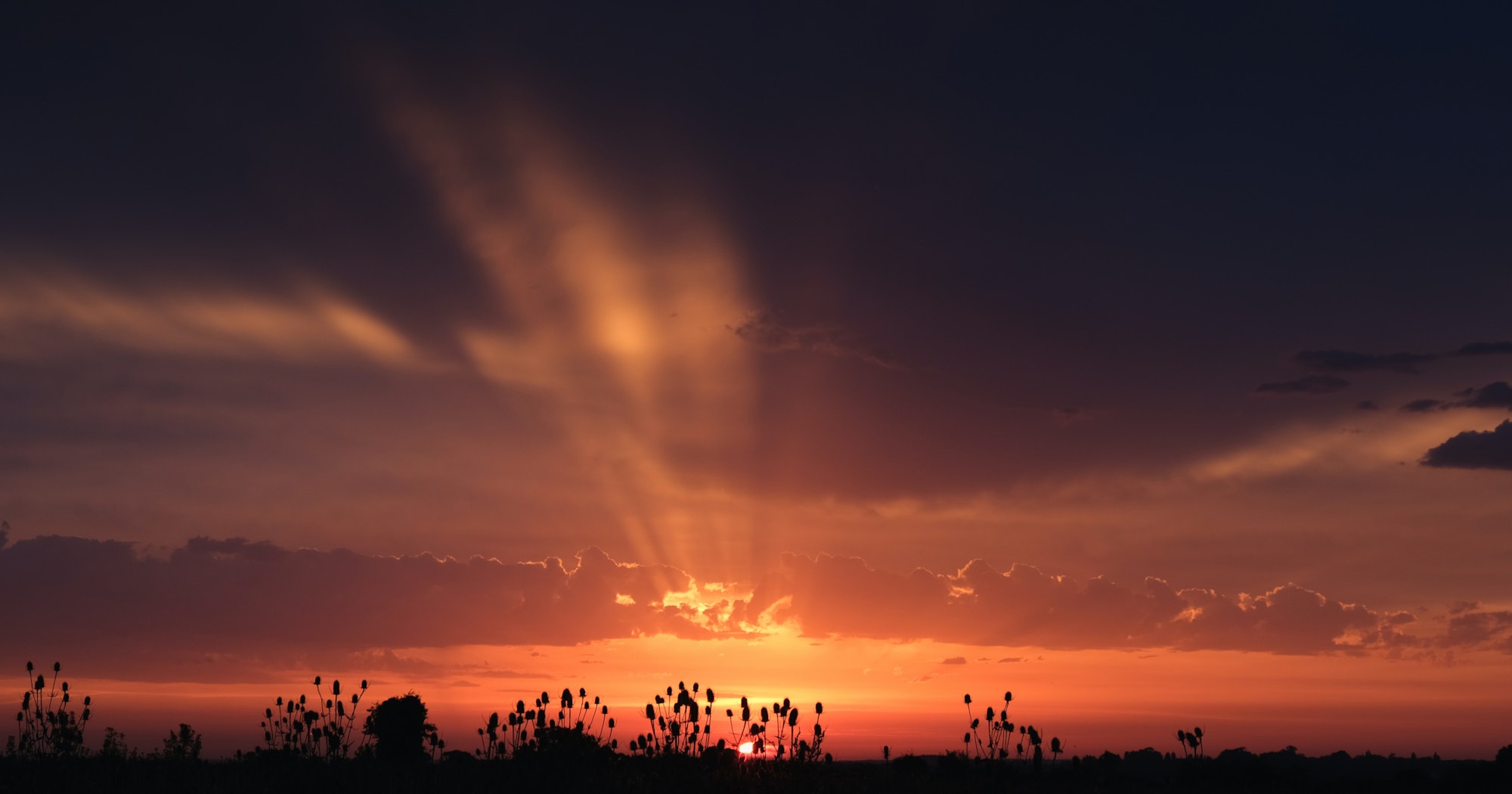 I grew up singing about God’s glory. Now I sometimes wonder what, if anything, went through my head and heart as I mouthed those words.

In church, we sang the major chords with gusto: “To God be the glory, great things he has done.” And I remember the more prayerful, “Father, we love you, we worship and adore you. Glorify thy name in all the earth.”

Such is the unspeakably precious, yet also challenging, heritage of being raised in a Christian home and in a faithful church — a gift I would not trade for any alternative. Many of God’s greatest gifts in this present age come with dangers. One danger in singing such (literal) glories from an early age is that priceless phrases like “the glory of God” can become mere religious slogans and church-talk — empty, in an immature mind, of the content that has led others, in generations before us, to take up such language with wonder and delight.

I was almost 20 years old when God opened my eyes (in a new way, if not altogether) to the meaning of his glory: its centrality in his creation and providence and in all the Scriptures, and the privilege and joy it is, in Christ, to daily consecrate one’s human life to glorify his name.

Luke 11:1 tells us that, after observing Jesus praying, one of the disciples said to him, “Lord, teach us to pray, as John taught his disciples.” Don’t let the weight of this moment be lost on you. The disciples have seen and heard him pray. They have observed his life, his manifest normalcy as human and yet his striking holiness that almost seems otherworldly. The request to receive Jesus’s instruction on “how to pray” must have rung in the disciples’ ears as a stroke of genius. Yes! Why didn’t we ask him sooner?! What will he say? Perhaps a few, picking up on his pattern of answering questions in surprising ways, braced themselves for some unexpected angle — and then found themselves surprised again that this time he would answer so immediately and directly.

How thrilled might they have been when he opened his mouth, with no delays or rabbit trails or disclaimers, and simply began to answer: “When you pray, say . . .” (Luke 11:2).

Matthew 6 reports another instance when Jesus modeled the same essential prayer, but this time in the context of his famous Sermon on the Mount. Here too his introduction had the same wonderful directness and immediacy: “Pray then like this . . .” (Matthew 6:9).

Before making any request or plea, Jesus first startles them with his address: “Our Father in heaven.” He is indeed modeling prayer for us, saying not “my Father” but “our Father.” And he draws together two seemingly opposite realities in doing so: the nearness and tenderness of God as Father, alongside the majesty and power of a Father who is in heaven. We might see here an anticipation of the six requests to come (Matthew 6:9–13) — in heaven, the magnificence of the first three pleas (verses 9–10), and in Father, the mercy of the final three (verses 11–13). A kind of three-and-three structure follows Jesus’s striking address.

Yet, as John Piper has observed, “There is something unique about the first petition.” Not only is there a genuine three-and-three, but also a one-and-five.

Again, imagine that priceless moment with the disciples, or during the Sermon on the Mount, with his followers on edge: What will Jesus pray first? This is it, his model prayer. This is how he himself prays, and how he says we should pray when we ask him to teach us to pray! Of all that Jesus might pray first, not just in any given prayer, but in the model prayer for us to learn and imitate, what will it be?

Hallowed be your name.

So, this first petition includes two actors: not only the explicit one (God himself) but also implicit ones (the countless humans who will “sanctify him” or “make him holy” in their minds, hearts, mouths, and lives).

What, then, of this word holy? How do we think about that, and does it relate, or not, to God’s glory?

Holiness, it is often summarized, relates to God’s separateness or otherness. He is separate from his creation and people, even apart from sin, and all the more with sin in view. As God, he is not common to our world and race, but holy. He is not just distinguished and different, but other — other, as Creator, from his creation and creatures, and other, as God, from sinners. In a sense, holy is an adjective for this unique otherness and distinct separateness of God the creator in relation to everything he has made.

“Holy means not only ‘separate’ but also ‘better.’ Our God is not just different from us, but we adore him for it.”

But beware, holiness is not mere separateness from creation, creatures, and sin. Holy implies other and better. Our God is not just different from us, but we adore him for it. He is distinct and marvelous.

The way his holiness, then, relates to his glory, is that his holiness is who he is as separate from us and better, and his glory is the visible and audible making known of his intrinsic value and infinite worth. Which means that to pray, as Jesus does, for God’s name to be made holy is to pray, in essence, for him to be glorified. “Father, may you be glorified! May your name be made holy! May you be seen and appreciated and praised, in my own eyes and in the eyes of all the nations, for your divine uniqueness and infinite superiority.”

This petition not only is the first out of Jesus’s mouth, in his model prayer, and thus assumes a kind of priority and importance, but it’s also distinctive in an important sense. Piper continues,

In this petition, we hear the one specific subjective response of the human heart that God expects us to give — the hallowing, reverencing, honoring, esteeming, admiring, valuing, treasuring of God’s name above all things. None of the other five requests tells us to pray for a specific human response of the heart.

Jesus’s prayer, and ours, that our heavenly Father’s name be hallowed doesn’t mainly refer to his glory in the skies above, or as seen in mountains and oceans below, or in plants and animals. Rather, the main referent is humans — thinking, feeling, willing humans. May his name be made holy, be glorified, in human minds and hearts and mouths and lives, beginning with the one who is praying, and extending into all the earth, across mountains and oceans, to all who dwell beneath the sky.

So, this first petition is both for the Father’s glory and for us to be instruments of his glory — that our Father in heaven be made holy first in our thoughts of him and our feelings about him. That we know him truly and enjoy him duly. That he be honored as holy in our mental perceptions of truth and in our emotional receptions of his beauty and worth. That we cherish him, delight in him, treasure him, value him, adore him, worship him.

Which leads, then, practically to how we might go about following our Lord’s lead, and doing so for a lifetime, but without language like “be glorified” and “hallowed be your name” growing old and becoming the very heaping up of empty phrases that Jesus warns about just breaths before his model prayer (Matthew 6:7).

May It Never Grow Old

One way to keep our daily prayers fresh and real, and particularly Jesus’s “pray this first” example of our hallowing the divine name, is to avail ourselves of the great breadth and depth of biblical and modern language at our disposal for both God’s objective value and glory as well as our own subjective God-honoring responses to him.

“His glory is far more precious than our repetition of the word ‘glory’ can adequately account for.”

So, we press into service a breadth of language for his glory: his honor, his praise, his name, his fame, majesty, splendor, dominion, power, strength, and beauty. We reach and stretch for words and concepts, from Genesis to the Psalms to the Gospels to Revelation, and in our own experience of God’s created world and redeeming grace. His glory — the shining radiance of his out-streaming holiness — is far more precious than our repetition of the word glory can adequately account for.

So too, in seeking to honor him, we press into service a depth of language for our joy in him: we adore him, marvel at him, stand in awe of him, delight in him, enjoy him, treasure him, cherish him, reverence him, esteem him, even hallow his name.

And as our hearts align with this plea — the hallowing of God’s name, which Jesus said to pray for first — the rest of our prayers (for both material and spiritual goods) will begin to fall into their proper place and proportion. God will indeed see to it that his name be made holy, that he and his Son be glorified, and that it begins in us, even as we pray.