By Matt Bradner — 1 month ago 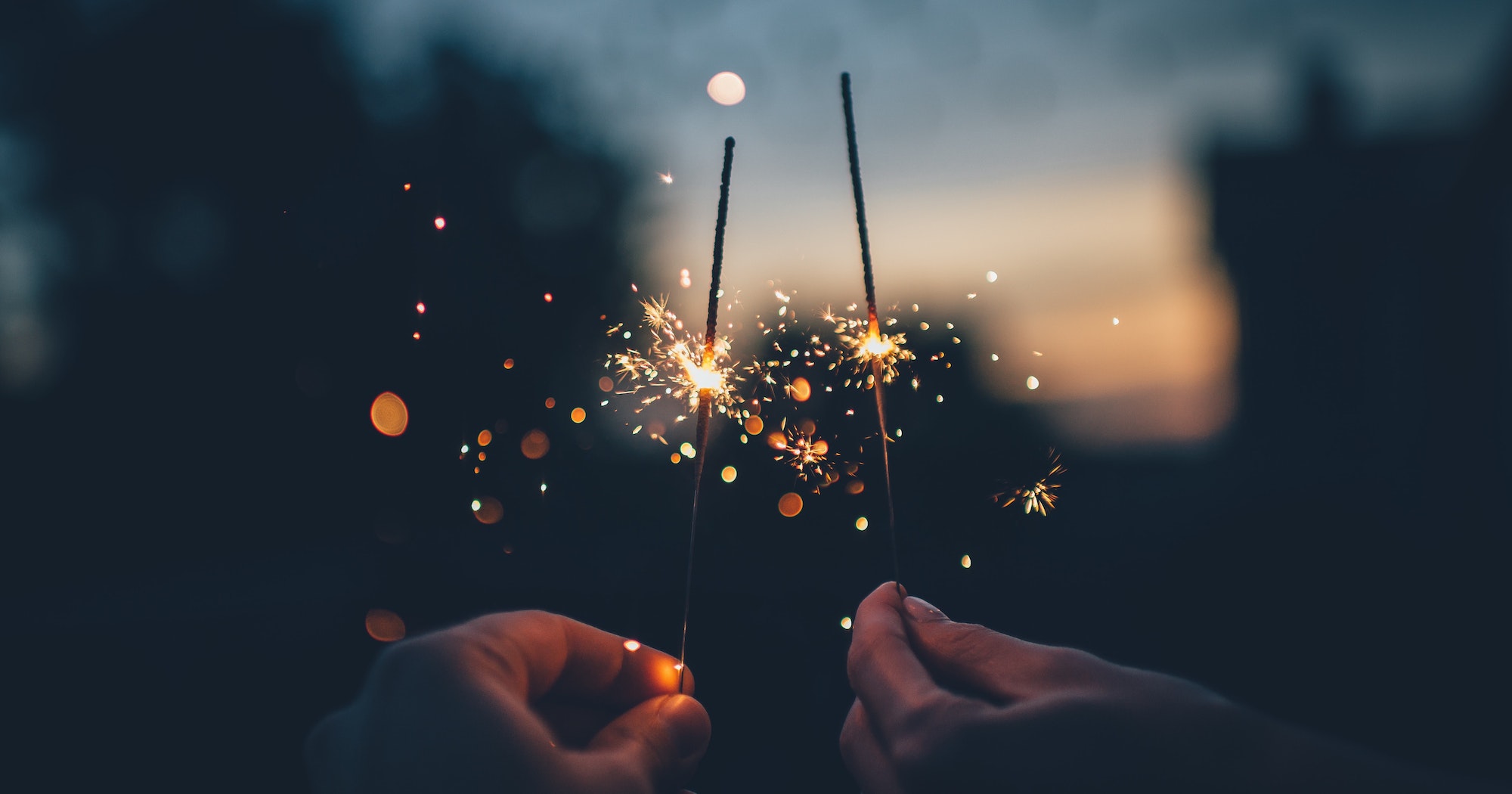 When it comes to New Year’s goals, I’m very aware that many despise the practice. The resistance is reasonable.

Some reject resolutions as a marketing scheme created to counter the post-Christmas purchasing lull. Others feel that new commitments are pointless because they’re so often abandoned by February. Still others resist the negativity of starting a new year focusing on who they’re not. As understandable as these objections are, though, I can’t fathom entering a new year and viewing it as just another day. You could say I’m haunted by the moment.

Every year, when I write “January 1,” it dawns on me again that I’ve been gifted with another year on this earth. I’ve made yet another trip around the sun. It may seem as though life goes round in a circle: another January, another year, another chance — but then the haunting moment comes: “January 1 . . . 2023.” That moment never fails to take my breath away. After we watch the ball drop and the clock pass midnight, we wake up where we have never been before — the land of a new year — and when this year is over, we will never be here again. All of history — past, present, and future — resides not on a circle, but on a line.

The line that began with the creation of the heavens and the earth is headed somewhere — to the culminating point in which the dwelling place of God is with man, and all those who have trusted in Jesus experience the joy of God making all things new (Revelation 21:1–5). Knowing where history is headed and that God is at work along the way, I can’t imagine beginning my one and only shot at 2023 without pursuing some big goals for the year ahead.

If these words inspire you to do the same, I’ve discovered a well-marked yet seldom-traveled pathway to setting wise goals.

Hikers know that sometimes the path to a destination seems to take you in the opposite direction. A journey to the mountaintop can start downhill. In these moments, it requires faith to trust the trail. Similarly, the journey to something big will be attained by consistently embracing that which is small. Small decisions lead to great destinations.

This shouldn’t come as a surprise to those who are familiar with Jesus’s way of life and teaching. Not only does he consistently tell us to embrace paradox, but he also explicitly teaches that the way of the kingdom begins small. The kingdom is like a grain of mustard seed, “the smallest of all seeds,” that grows and becomes a tree (Matthew 13:31–32).

“Jesus explicitly teaches that the way of the kingdom begins small.”

And not only does the kingdom of God start small, but progress is often hidden from our sight, like “leaven that a woman took and hid in three measures of flour, till it was all leavened” (Matthew 13:33). If the pathway to greatness starts small and progress often remains hidden, it’s no surprise that so few consistently embrace it.

Our flesh keeps us on the couch, waiting for opportunities that appear to promise instant and immense impact. Those who constantly dream of the big victory often overlook the small decisions required to get there. This type of home-run mentality seems to be exactly where Satan wants us to be. It’s no secret that he tempted Jesus with comfort and glory (fake as it may have been) that was instant and immense (Matthew 4:1–11). I’m convinced Satan is still running the same playbook, and we may be easy targets.

We can test how susceptible we’ve been to his scheme by what we do (and don’t) remember about David, the shepherd boy who eventually becomes king of Israel.

Regardless of your religious upbringing, most people can name David’s big victory. He defeated the Philistine giant, Goliath. Far fewer, however, can recall what brought David to the battlefield that day. David didn’t wake up in the morning, put on some hype music, and look into the mirror proclaiming, “The world will remember you after today.” No, it was actually a small, humble decision that led him to that great destination.

While all the “men of Israel” went to fight the Philistines, David was considered too young and remained at home tending the sheep. David’s father came with a request: “Will you take lunch to your brothers at the battlefield?” If there ever were a pathway to greatness that started small, it was this one. Specifically, David was asked to bring grain and bread to his brothers, and ten cheeses to King Saul (1 Samuel 17:17–18). David was a tomato away from being a pizza-delivery boy. Humor aside, you can imagine the potential tension in his heart.

On the one hand, he may have been crushed that his greatest contribution to the war was cheese, not combat. On the other hand, I suspect he still carried himself with honor, remembering the moment when God led the prophet Samuel to anoint him as the future king of Israel (1 Samuel 16:11–13). The promise was certain, but the pathway remained unclear.

Imagine if David had responded to his father, “Dad, really? Lunch? Cheeses? No thanks, I’m holding out for something big today.” By embracing this small, seemingly insignificant act of service, David was unknowingly set on a path to greatness. Small decisions lead to great destinations.

As you prepare for the new year, I would encourage you to consider the small decisions you might make and keep. Personally, I am committed to starting the year with three small decisions in mind.

The first is to start each day with devotion. The key moment will be when I first wake each morning. My goal is to turn my attention toward God in prayer and the word before turning to my phone. My second decision is to deliberately and consistently look for small acts of kindness that could serve those around me. Lastly, I am committed to taking it one day at a time. After proclaiming that we should praise the name of the Lord forevermore, David starts surprisingly small: “From the rising of the sun to its setting, the name of the Lord is to be praised” (Psalm 113:2–3).

One devotion, one kindness, and one day at a time. I’m starting with those three small decisions this year. What will yours be?

David’s big evil is just as iconic as his big victory. He slept with Bathsheba, a married woman, and then, to cover up what he’d done, had her husband given a sure-death assignment on the battlefield (2 Samuel 11:14–15). As with the Goliath victory, we would benefit from remembering how David ended up entwined in such great evil.

As you could probably guess, David didn’t set out to have an affair and commit murder. Like the pathway to greatness, the road to destruction also began with a small decision. For David, it began here: “In the spring of the year, the time when kings go out to battle, David sent Joab, and his servants with him, and all Israel” (2 Samuel 11:1). David had a job to do, yet chose to send someone else. However inconspicuous it may appear at first glance, it was the first step among many that set him on a path to destruction. Small decisions lead to great destruction.

I imagine that the dark side of small decisions lands heavy, as it should. We ought to regularly pause and consider the unwanted consequences of our daily choices. In doing so, we are following the way of the wise, who “see danger ahead and hide themselves” (Proverbs 27:12). While this isn’t a pleasant process, there’s a silver lining around the cloud of our choices. If small decisions can take us to great destruction, then it is also through them that we can avoid many evils.

Perhaps this is why Joseph sends his brothers home from Egypt with the seemingly small request to “not quarrel along the way” (Genesis 45:24). Joseph could have rightly charged them not to plot to kill or sell each other into slavery, but he didn’t. It’s conceivable that Joseph knew that the flaming hatred they once had toward him grew from the kindling of quarrelling. Friends, small decisions can prevent great destruction.

Whether they lead us to great destinations or great destruction, small decisions will shape the direction of our lives. Tomorrow night, we will hear those familiar words, “Happy New Year!” It will feel like we’ve been here many times before, but we haven’t. History has now made its way to the year 2023, and we are part of the story. I invite you to join me in pursuing something great this year, one small decision at a time.