To Follow Jesus, You Have to Persevere. But How? 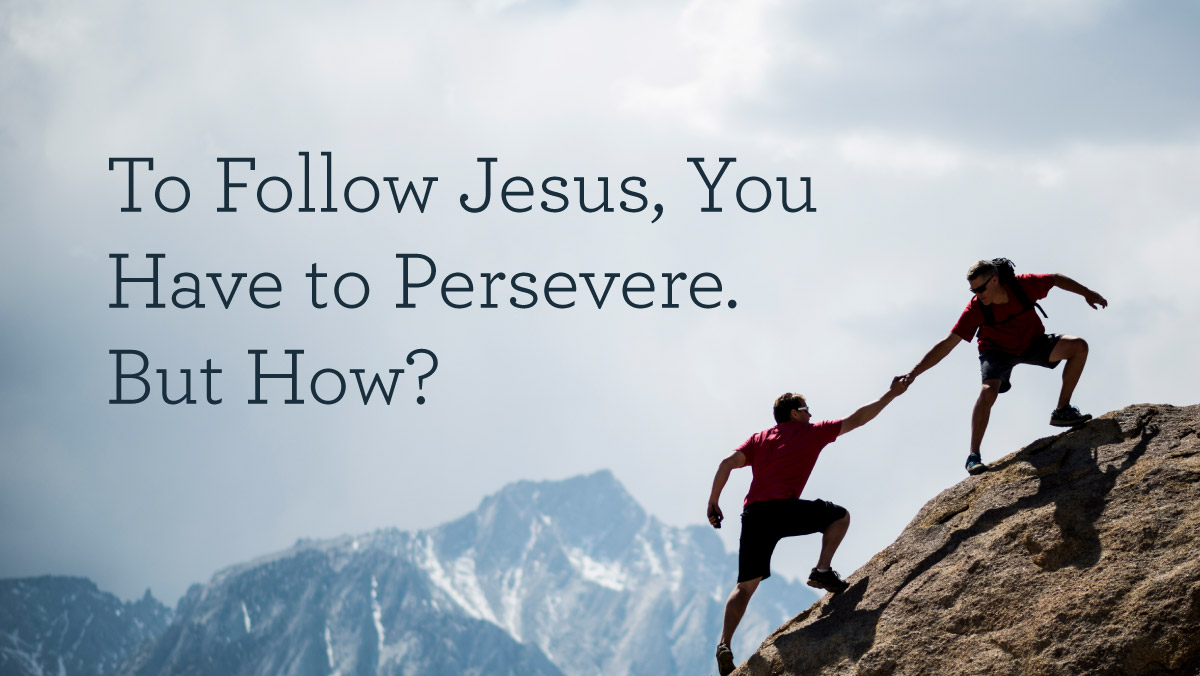 During Jesus’ ministry on earth, while people answered His call to follow Him, not all became lifelong followers. The Gospel of John tells us of at least one incident when many who had been His disciples “turned back and no longer walked with Him” (John 6:66). Nevertheless, some stood with Him through thick and thin, repenting and seeking His forgiveness on the occasions when they did fall away.

What does it mean to follow Jesus? Among other things, it means to leave your old way of life in the past and to continue in faith and obedience even in the face of waiting, of hardship, and of persecution. To follow Jesus, in other words, means to persevere.

As Jesus became more well-known and His public ministry became more celebrated, He recognized that it was important to teach the vast crowds that perseverance is essential to following Him. And so He told them a parable about a farmer who sowed seed in four different kinds of soil. Whether the seed sprouted in each soil and how it sprouted represents the way the Gospel is received in the hearts of those who hear it. As Jesus explained, there are many ways to fall away from His word, but only one way to follow: through persevering, obedient faith. And this faith is a gift from the Lord.

“A sower went out to sow his seed. And as he sowed, some fell along the path and was trampled underfoot, and the birds of the air devoured it. And some fell on the rock, and as it grew up, it withered away, because it had no moisture. And some fell among thorns, and the thorns grew up with it and choked it. And some fell into good soil and grew and yielded a hundredfold.” (Luke 8:5–8)

In first-century Israel, it was customary to sow wheat and barley by hand. Inevitably, the seed would fall in all kinds of places, and where it fell would in large part determine whether it would yield a crop. In the parable, Jesus describes three bad soils that fail to yield and only one good soil that produces fruit. These, he explains, are four different kinds of hearers of the word of the Gospel. Only one kind becomes a follower of Jesus Christ. The others are mere hangers on.

Some seed fell on the path and was trampled and eaten. This, Jesus says, represents those for whom “the devil comes and takes away the word from their hearts, so that they may not believe and be saved” (Luke 8:12).

Among those who may seem to follow Jesus, these are the professional hearers. Though they may listen to the Gospel being proclaimed again and again, each time they become more and more indifferent. They sit in the same seats, hear the same words, and repeat the same professions as others, but their hearts remain unmoved. In the words of Hebrews 4:2, “the message they heard did not benefit them, because they were not united by faith with those who listened.”

Merely hearing is not enough for who do not put their trust in Jesus Christ. The Gospel is effective when it produces faith in its listeners. Professional hearers are not followers; they are complacent spectators enjoying themselves at the edge of the crowd.

Other seed fell among rocks and developed weak roots. This represents those who “receive [the word] with joy” but “in time of testing fall away” (Luke 8:13).

These are the impulsive professors. There are many people who will hear the Gospel and make professions of faith in Jesus Christ, but within a very short period of time, they are nowhere to be found among the body of believers. They were caught up in the song, they agreed with all of the slogans, they thought they were a part of the movement, but once something is actually asked of them, it’s easier to simply go home.

When the Word of God comes to us in its truth, however, it not only creates joy in the hope of salvation, but it reveals to us that we are sinners in need of repentance and a change of heart. Many have said a “sinner’s prayer” on a whim, but only the Holy Spirit can bring genuine sorrow for sin and a new birth. Only those whom God creates anew can follow Christ in obedience.

The Preoccupied Hearts and Minds

Still other seed fell among soil filled with weeds, which ate up all the nutrients they needed. This represents those who “are choked by the cares and riches and pleasures of life” (Luke 8:14).

Such individuals are preoccupied with their surroundings. They have made professions, and they have stuck around, playing the religious game, but they are too concerned with the things of this world to follow the Lord on His narrow path. Whether or not they actually have worldly wealth and pleasure, these things have become their gods, and they will not follow Christ in obedience when His path diverges from them. They enjoy the march and seem to benefit from it, but they are only there to benefit from it. They love the world first of all, and so “the love of the Father is not in them” (1 John 2:15).

Only one type of soil produces a fruitful crop. Jesus says, “As for that in the good soil, they are those who, hearing the word, hold it fast in an honest and good heart, and bear fruit with patience” (Luke 8:15, emphasis added).

These are the persevering followers. Jesus makes it very clear that those who continue in the word are His disciples indeed. They have combined their hearing with faith, they obey their Lord’s word even when it is costly to do so, and they keep doing so even when the hardships seem unrelenting. When the crowd’s songs have ended and most have dissipated, they are still there with their Lord. And even when they fall away, as the disciples did on the night of Jesus’ arrest, they come back repenting, and they follow again despite the high cost.

Perseverance is evidence of the salvation that Christ has accomplished, and it is enabled by the Holy Spirit.

These show by their perseverance that they are actually born again—people whom the Spirit has changed into followers of Jesus Christ.

Christians show themselves to be true followers of Christ when they persevere in obedient faith through all the trials and temptations of this present age. Yet perseverance doesn’t mean perfection. The life of a believer is a life filled with repentance. Nor is perseverance the ground of salvation, which is born of grace alone, by faith alone. Like obedience, however, perseverance is evidence of the salvation that Christ has accomplished, and it is enabled by the Holy Spirit.

We keep on in faith because God keeps us. Those whom Christ has called and to whom the Spirit has given new birth may be encouraged by Paul’s word to the Philippian church: “He who began a good work in you will bring it to completion at the day of Jesus Christ” (Phil. 1:6). No one, Jesus says, can snatch His sheep from His hand.

We keep on in faith because
God keeps us.

Nevertheless, God does not do His work of perseverance apart from our obedient faith. God at work in us means us at work for God. So when we are tempted to fall away from walking in the footsteps of our Lord, we can remember the promise that “God is faithful, and he will not let you be tempted beyond your ability.” But we must also be aware that “with the temptation he will … provide the way of escape, that you may be able to endure it” (1 Cor. 10:13). And among the many ways of escape from temptation that God provides to His people, we ought to remember three that He has given to all Christians so that they may persevere in obedient faith.

The Word of God

First and foremost, God has given us His Word, the Bible, so that we can hide it in our hearts to prevent us from sinning.

Scripture contains all kinds of warnings to prevent us from being flippant and careless. It explains the pattern of God’s purposes for us so that when life is difficult, we don’t understand things, and we think that God has forsaken us, we’re able to keep going in the knowledge that He walked the path of suffering before He called us to follow Him on it. It also provides us with great and precious promises to encourage us in all circumstances, so that we may know that “the sufferings of this present time are not worth comparing with the glory that is to be revealed to us” (Rom. 8:18).

As we read and hear God’s Word and take it to heart, His Spirit will enable us to persevere, not because of how we feel but because of who God is and what His Word says.

The Duties of Obedience

How we obey God’s Word is most often a matter of duty. Obedience is not sporadic and circumstantial but regular and habitual. When we begin to slide back from following Christ, the great temptation is to neglect the everyday duties of obedience. It’s to say, “I’ll let my Bible reading slip.” It’s to say, “I won’t go to worship this week.” It’s to say, “I’m not going to share the Gospel with this neighbor, because I don’t feel like it.”

As we read and hear God’s Word and take it to heart, His Spirit will enable us to persevere, not because of how we feel but because of who God is and what His Word says.

The Fellowship of Believers

God at work in us means us at work for God.

During seasons of busyness or weariness, it’s tempting to skip the corporate gatherings of the church and make the excuse that “after all, God is with me wherever I am, and I can worship Him here at home.” But when the author of Hebrews encouraged his audience to persevere in obedient faith, he wrote, “Let us consider how to stir up one another to love and good works, not neglecting to meet together, as is the habit of some, but encouraging one another, and all the more as you see the Day drawing near” (Heb. 10:24–25). God has made fellowship available to us to help us persevere through the stirring up and encouragement we provide to one another.

Hebrews 3:14 says, “We have come to share in Christ, if indeed we hold our original confidence firm to the end.” Our perseverance is the evidence of God’s continuing grace in our lives, which has its inception “before the foundation of the world,” when God “in love … predestined us for adoption to himself as sons through Jesus Christ” (Eph. 1:4–5). What God conceived then He will not renege on now. If you would put your trust in Christ, trust that He will carry you through to the end. Then set your feet firmly on the path that He has established, and sing together with the saints, “I have decided to follow Jesus—no turning back, no turning back.”