By Tim Challies — 9 months ago

May you know the Lord’s rich blessings as you prepare to worship him this weekend.

Logos users will want to look at this month’s free and nearly free books.

(Yesterday on the blog: Responding Wisely to Domestic Abuse in Your Church)

Stream the Luther Documentary for Free

Throughout October you can stream the excellent Luther documentary for free courtesy of Ligonier Ministries. They’ve also got a study guide to go with it.

“The secular world clearly controls the language game. Be careful you’re not taken in by it.” Greg Koukl explains and offers an example.

How Do We Prepare for the Second Coming?

“A young woman — beautiful face, clothes casual and colorful, long hair swinging as she made her way to the corner. She carried a loaded backpack, but its weight didn’t affect her happy gait. A man passed by her with a lingering look that might have caused discomfort for others. But not this woman. She was all confidence, with a smile that told a story of grace.”

All Mission Should End in Local Church

“At the end of the day, all mission should be working to this end: the planting of a biblical church. If you are doing evangelism or running mission with no intent of building a local church, I will go as far as to say you are doing it wrong. All biblical mission ends in local church.”

This is very alarming information from Australia. “I just got off the phone with a friend and fellow baptist pastor from Melbourne. He has resigned himself to the likelihood that he will face imprisonment over the next few years.”

What Is The One Thing You Want The Congregation To Remember From Your Sermon?

“As we proclaim the word of God, we need to be asking ourselves ‘what is the one thing that will stick in our congregations’ minds from this sermon?’ We delude ourselves as preachers if we think that people will remember all the intricate points and verbally dextrous language we use. Most will remember one or two big things that we communicate.”

When you don’t pray for the people in your church you may soon find your heart cooling toward them. Once your love cools you may find yourself blaming them for your discontentment when really it began within you. 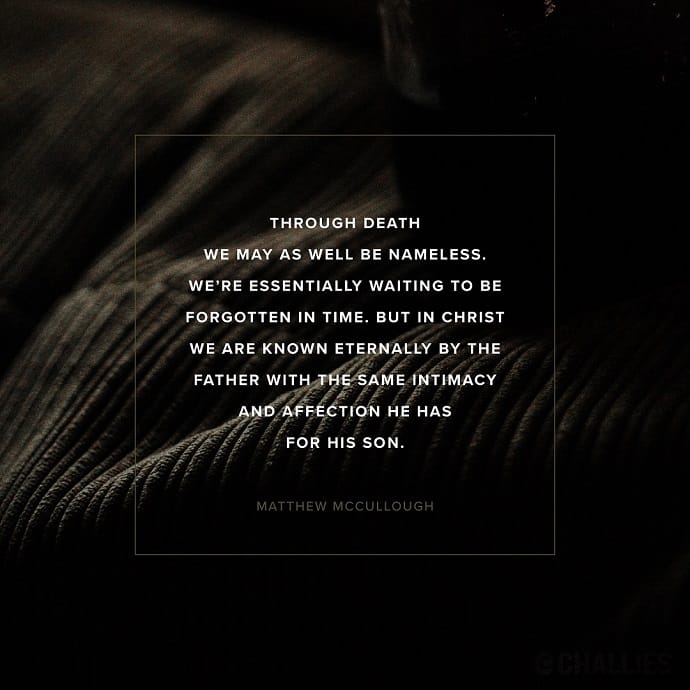 Through death we may as well be nameless. We’re essentially waiting to be forgotten in time. But in Christ we are known eternally by the Father with the same intimacy and affection he has for his Son. —Matthew McCullough