What Does Obedience Have to Do with Following Jesus? 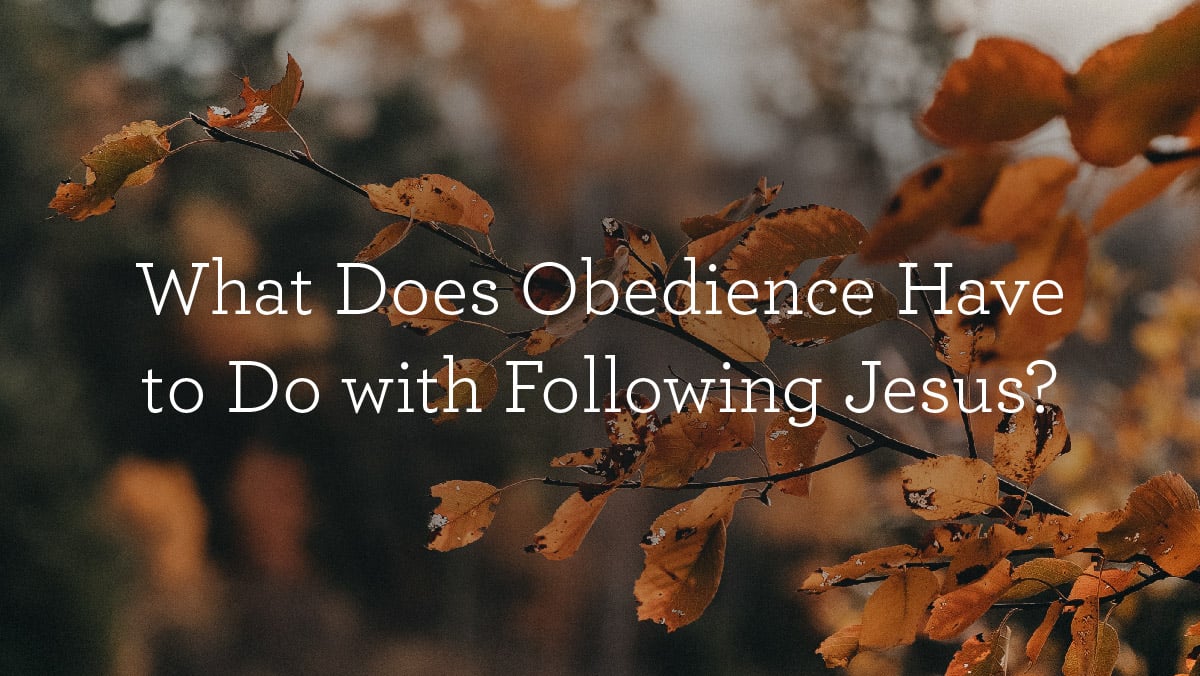 When Jesus called the first disciples, He called them to leave everything and follow Him. In other words, He asked them to put their faith in Him. But they didn’t simply say they believed. They didn’t pull one bumper sticker off their boat and replace it with another. They left the boat behind. On the foundation of their faith, they stepped forward in obedience. What does it mean to follow Jesus? It means not only to call Him “Lord” but also to honor Him as Lord by obeying His commands.

If you talk to people about spiritual things and the truths of the Gospel, many conversations will end like this: “So long as you have faith, that’s all that matters,” or “So long as you’re sincere, that’s what really counts.” That certainly sounds good, and on the surface it may seem biblical—but it isn’t true. There is a further question that needs to be asked: “Faith in what? Sincerely regarding what?” Some people have faith in having faith. Some people sincerely believe lies. Faith and sincerity on their own count for nothing. It is God in Jesus Christ who saves, by grace, through faith in Him (Eph. 2:8). There is no internal disposition that secures salvation for us, no set of words that God treats as a ticket to heaven. Christ saves those who trust Him—and those who trust Him follow Him.

In Luke 6:43–49, at the conclusion of His Sermon on the Plain, the Lord Jesus speaks with great clarity to the kind of people who have adopted a false optimism, and He speaks with the authority which is only His as Lord. With a convicting question and a revealing illustration, Jesus teaches us that to follow Him in faith means to obey His commands. It is one thing to call Him Lord; it is another to submit to His lordship. To be a Christian is to do both.

But before we turn to Jesus’ question and illustration, we must clear up a misconception about the faith that Jesus seeks.

The Faith That Jesus Seeks

“No good tree bears bad fruit, nor again does a bad tree bear good fruit, for each tree is known by its own fruit. For figs are not gathered from thornbushes, nor are grapes picked from a bramble bush. The good person out of the good treasure of his heart produces good, and the evil person out of his evil treasure produces evil, for out of the abundance of the heart his mouth speaks.” (Luke 6:43–45)

Many Christians know that it is faith alone that saves. This is a wonderful truth to grasp, but it will do a person no good if they misunderstand what faith actually is.

Faith is not the intellectual acceptance of certain propositions about Jesus. It includes the acceptance of propositions, to be sure—but that in and of itself is not saving faith. James 2:19 tells us that “even the demons believe” that there is one God. The devil is orthodox in what he knows to be true about God, but he has not entrusted himself to God. What we need is not simply to assent to the truth about Jesus; we need also to consent to take Christ.

To follow Jesus in faith means to obey His commands. It is one thing to call Him Lord; it is another to submit to His lordship. To be a Christian is to do both.

Saving faith is the entrustment of our lives to Jesus as Lord and Savior. It is not simply the belief that we have been saved, nor is it merely the belief that Christ died for us, but it is the commitment of ourselves as unsaved, lost, helpless, and undone people unto Christ. It is trusting that Jesus Himself redeems and, by His Holy Spirit, brings the dead to life, seals us, and sanctifies us. It is the realization that the power to save belongs to God, and it is the humble seeking of that transforming power in our lives. And it involves the expectation of a radically different life, not simply in an abstract, legal, promissory sense but also in the immediacy of a restored relationship with God.

John Calvin, who helped the church to recover the doctrine of salvation by faith alone during the Reformation, put it like this: it is faith alone that saves, but the faith that saves is not alone. True faith always overflows in obedience. As noted above, this is what Jesus Himself said: “The good person out of the good treasure of his heart produces good, and the evil person out of his evil treasure produces evil” (Luke 6:45). In other words, the content of the heart overflows with action, and that action reveals the content of the heart. God’s people are those who have thrown themselves onto Christ through faith and have been transformed by God’s Holy Spirit. Such people are, in their hearts, rooted in Christ through faith and will therefore overflow in obedience to Him—not perfect obedience but the kind of striving that marks repentant sinners-made-saints.

Obedience thus springs from faith, not the other way around. Yet true faith is always followed by obedience.

Jesus’ question in Luke 6:46 is rhetorical. When He asked it, He wasn’t looking for an explanation; He was demanding repentance. He was essentially saying, You think you understand what it means to follow Me, but your life says you don’t. If you were really following Me, you would do what I command. (See John 14:15; 15:14; 1 John 2:3; 5:3.) Words are no substitute for obedience. Both then and today, the people who have truly made Christ their Lord obey His commands.

Paul tells us in Romans 10:9 that people are saved who confess that “Jesus is Lord.” In our culture of equity, we are in danger of losing our concept of that word “Lord.” The Greek word it translates, kyrios, was what slaves used to address their masters, and it’s what all Roman citizens called the emperor. The relationship between the master and the slave was not casual. The relationship of the emperor to his people was not casual. These were relations of complete authority and sovereign rule. When someone said, “This is my lord,” they were saying, “This is the one I will obey.”

“Jesus is Lord” is a pledge of obedience. So Jesus asks, Why do you pledge to obey and then refuse to obey? Why don’t your actions live up to your words? He is directing this question to those who have made their declaration of faith, but there’s no change in their life, inside or out. The implicit answer is that such a person has not really made Jesus their Lord. When the pledge of obedience that “Jesus is Lord” is not followed by actual obedience to His commands, it reveals a heart that is not resting on Him, despite the declarations of the lips—because faith that is rooted in and founded upon Jesus Christ ought to overflow in obedience.

“Everyone who comes to me and hears my words and does them, I will show you what he is like: he is like a man building a house, who dug deep and laid the foundation on the rock. And when a flood arose, the stream broke against that house and could not shake it, because it had been well built. But the one who hears and does not do them is like a man who built a house on the ground without a foundation. When the stream broke against it, immediately it fell, and the ruin of that house was great.” (Luke 6:47–49)

In this short parable, Jesus tells us about two builders. Both represent those who hear Jesus’ words. Both are building houses. Both are in danger of a torrent that is about to strike the houses. But only one of the two men is prepared for the torrent to come—the one who built his house upon a solid foundation.

The first builder represents those who not only hear Jesus’ words but also do them. He is everyone who comes to Christ, receives His Word, and lives their life on the strength of it—those who have put their faith and trust in the Lord Jesus Christ alone. They have understood that they need to go down to solid rock, and that rock is Jesus. And when the days of testing come, as they surely will, the lives of those who have set their faith on the rock of Jesus Christ will stand in the midst of the torrent.

Obedience springs from faith, not the other way around. Yet true faith is always followed by obedience.

Yet among those who hear the Word of God, there will always be some like the second builder as well. This man represents those who say, “Lord, Lord,” but in their heart of hearts, it is not Christ that they trust. Their hearts do not yet overflow in obedience to the Lord they confess, because their faith is not truly resting on Him. And when the flood comes, they are guaranteed to be swept away.

The good news is that for people like the second builder, it is not yet too late. There is still time to say, “Lord, I am helpless and needy, and I cannot save myself. I set myself upon You in trust that You will save me. And because I have put my trust in You, I will obey.” Apart from trust in the solid rock of Jesus Christ and the obedience that springs from it, the temptations and hardships of life sooner or later will prove too much to bear, and all facades of false “faith” will collapse. If we would confess Jesus Christ, then we must be prepared to ask ourselves: “Am I ready to follow Christ in true faith, so as to obey Him?”

This article was adapted from the sermons “If Anyone Would Come after Me, He Must… Practice What He Hears” and “False Faith” by Alistair Begg.