What Is True Faith? 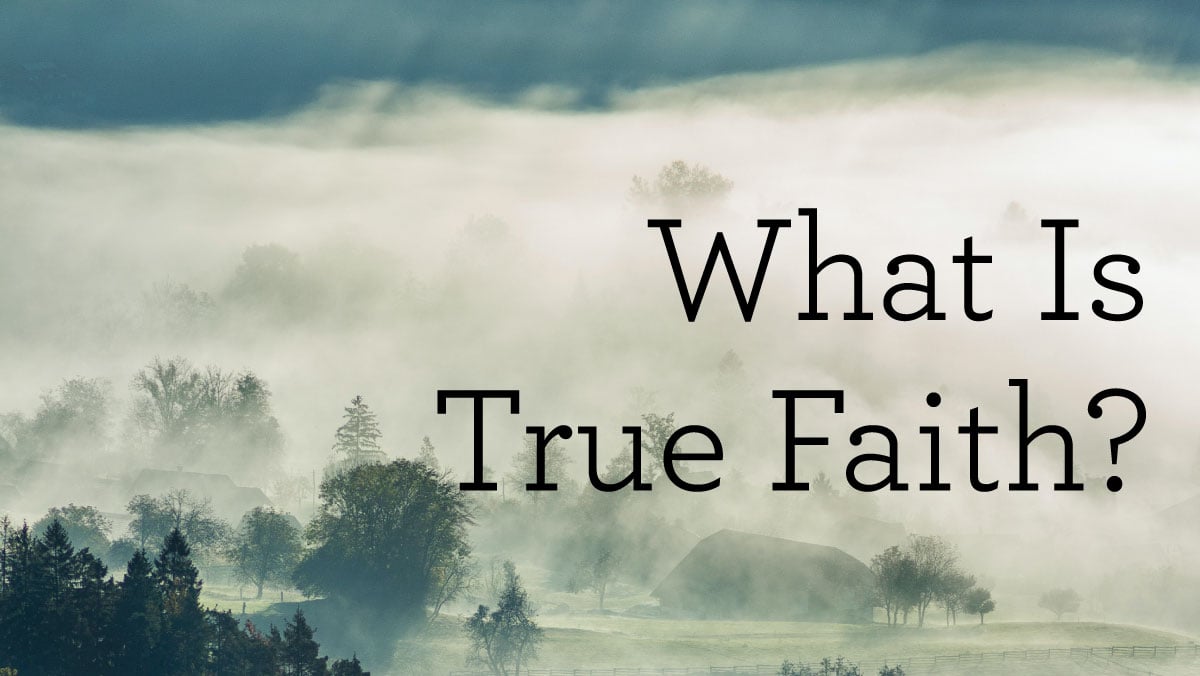 To one degree or another, everyone has faith. Anyone who has sat down in a barber’s chair has exercised faith in the barber’s skill. Anyone who has used an app to send money has trusted that it will get to the right person. But when it comes to the realm of religious experience, all kinds of spurious notions about faith abound. Indeed, one of the great barriers to an experience of true faith in God is confusion about what that faith actually is.

People often say, “As long as you have faith, that’s all that matters, isn’t it?” To that we can say both yes and no. Yes, faith does matter, and yes, faith alone is the means by which we take hold of God’s salvation. But true faith is not in and of itself. A large man may step out onto a sheet of ice one inch thick with great faith that he will not fall through—and he’ll soon be swimming! No amount of faith will make the ice hold him up. But a foot of ice and a mustard seed’s weight of faith (Matt. 17:20; Luke 17:6) will mean a dry (if slippery) walk. It is not the amount of faith but the object of the faith that matters. Faith is genuine and lasting when it is placed in the most trustworthy object of all: Jesus Christ, the divine Word made flesh (John 1:14).

The Gospel of John offers us an illustration of this kind of faith in the account of a royal official who came to Jesus seeking a miracle for his sick son. He directed his faith to the only one who has the power to do something—and Jesus indeed proved himself faithful. This short account reminds us that when we have true, saving faith, we will, like the royal official, seek the Lord’s help, persist in seeking Him, walk with trust in Him, and share the good He has done.

He came again to Cana in Galilee, where he had made the water wine. And at Capernaum there was an official whose son was ill. When this man heard that Jesus had come from Judea to Galilee, he went to him and asked him to come down and heal his son, for he was at the point of death. (John 4:46–47)

Genuine faith begins when a man or a woman is humble enough to come to Christ for help. In John 4:46, we see a royal official—perhaps a member of King Herod’s court—come to someone many thought of as a mere peasant for aid. It is an improbable scene, an event that would cause more than a ripple in this man’s social circle. But neither convention nor custom stopped him. He came humbly and sincerely, without caring what others might have to say.

You may believe whatever you like about Christ, but it is an empty faith if you have not bowed at the feet of Jesus the Nazarene to ask for the mercy. True Christian faith begins with the humility of heart to come as the royal official did and to ask Christ to do for us what we cannot do for ourselves .

So Jesus said to him, “Unless you see signs and wonders you will not believe.” The official said to him, “Sir, come down before my child dies.” (John 4:48–49)

In responding to the official, Jesus also addresses the larger crowd, challenging their preoccupation with the sensational. Even the official himself, if he was really from Herod’s court, may have been influenced by Herod’s sensational approach to things (Luke 23:8). So Jesus turns to the people and essentially says, “Is that all you’re interested in—that I would come around and do miraculous signs and wonders?”

True Christian faith begins with the humility of heart to come as the royal official did and to ask Christ to do for us what we cannot do for ourselves.

In this challenge was a test. If the official had given up despairingly on the spot or turned away petulantly, unwilling to accept the implied rebuke, Jesus would have known that he was a mere trifler like the rest of the crowd. Jesus is not an unwilling Savior, but He is not willing to be treated as a sideshow. We must be in earnest before the help of Christ can come to us—and an earnest faith is a persistent, persevering faith. It is faith that hangs on to Christ in the way a man fallen overboard clings to the lifeline offered him. And the official reveals such a faith with his desperate words: “Sir, come down before my child dies.”

We ought to be skeptical of any approach to Christianity and proclamation of the Gospel that does not first confront men and women with the necessity of seeing their sin and their need of Christ. That confrontation is ultimately the work of the Holy Spirit, who may come to a heart in a moment and say, “You’re drowning in the sea of your rebellion and indifference.” It is one thing to fill out a card at church and say, “I believe in Jesus Christ”—but words confessed from a heart that doesn’t believe flow from an empty faith (James 2:19). We will have true faith in Christ when we realize that there is nowhere else to turn and so persevere in crying for His mercy. True faith is “Help me!” faith.

Jesus said to him, “Go; your son will live.” The man believed the word that Jesus spoke to him and went on his way. (John 4:50)

The simplicity of Jesus’ words that follow is almost mind-boggling. Here is a man who has traveled all this way, risked his reputation, cried out for mercy, been confronted with this question of the miraculous signs, and replied with a word of desperately persevering faith—and the response of Jesus is simply to send him off with the promise that his plea has been granted.

You can imagine the official standing there, just dumbstruck for a moment, saying, “Is that it? Shouldn’t I have a certificate or something? Shouldn’t I take a little snip off your garment, Lord Jesus, and take it down and stick it on his forehead?” But Jesus simply says, “You may go. Your son is well.” He gives this man the opportunity of putting his faith into action. He gives him the chance to move from walking by sight (by looking at a miraculous wonder) into the realm of walking by faith (by listening to and believing a miraculous word).

We, too, are often preoccupied with signs and wonders. Some of us have almost a strange dependence on tangible, visible evidences—but they can quickly prove to be the trappings of empty faith. With true faith, we hear the promise of Christ to us, believe it, and, like the official, may set out again in obedience to the Lord’s word, knowing with certainty its truth.

While we have not all received a promise of physical healing as this royal official did, Jesus has offered us salvation from sin and death. In spite of the desperate condition to which sin has brought us, we may walk in His promise of life: “Truly, truly, I say to you, whoever hears my word and believes him who sent me has eternal life. He does not come into judgment, but has passed from death to life” (John 5:24).

As he was going down, his servants met him and told him that his son was recovering. So he asked them the hour when he began to get better, and they said to him, “Yesterday at the seventh hour the fever left him.” The father knew that was the hour when Jesus had said to him, “Your son will live.” And he himself believed, and all his household. (John 4:51–53)

As the official made the long journey home on the basis of Jesus’ word, his servants arrived with the astounding news that his son was living and well. They expected him to be dead. They had no explanation. But the official had the answer—and he couldn’t keep it to himself.

This was no time for secrecy! A happy, relieved father, he now had the privilege of sharing his faith with his household, who believed along with him. It may not have been easy to do so. Just like his going to Jesus in the first place, his proclaiming faith in the Galilean peasant may have come with a social cost. But genuine faith will always, sooner or later, become vocal.

We ought to be skeptical of any approach to Christianity and proclamation of the Gospel that does not first confront men and women with the necessity of seeing their sin and their need of Christ.

In Acts chapter 4, when the religious officials in Jerusalem told the apostles not to preach anymore of this man called Jesus, Peter and John replied, “We cannot but speak of what we have seen and heard” (Acts 4:20). It’s completely understandable that having faith for faith’s sake is not much to talk about. It is, after all, an empty faith. But when our faith has an object as wonderful as the divine Word who became a man to save people from their sins and welcome them into the life of God, it would be strange for us to keep quiet.

Because it is a faith in a trustworthy Savior, genuine faith begins with asking and persisting and proceeds with walking and sharing. Have you asked the Lord to save you? Have you asked as one who knows deep in your heart that there is nowhere else to go, since He alone has the words of eternal life (John 6:68)? Have you set out on a path of obedient trust, walking where His Word has directed you? And have you found this faith you’ve walked in worth sharing?

These are the attributes of a true faith that has the Lord Jesus Christ as its object. But we must remember that we can’t manufacture it. It doesn’t come by verbal manipulation or human constraint. It comes by the work of the Holy Spirit, who alone is able to turn us in faith to the only one worth believing in. The Scriptures tell us, “If you confess with your mouth that Jesus is Lord and believe in your heart that God raised him from the dead, you will be saved” (Rom. 10:9). Believe in Jesus, confess Him, and be saved! He is trustworthy, and He will do it. “Everyone who believes in him will not be put to shame” (Rom. 10:11).

This article was adapted from the sermon “An Illustration of Faith” by Alistair Begg. Subscribe to get weekly blog updates.